Port of Vitória: learn about its history

With more than 115 years of history, the Port of Vitória, located in the capital of Espírito Santo, has many memories to be told and much influence on the city’s growth.

Before the port, the unloading of cargo made in the state was done at the wharf Cais do Imperador, a very simple space, made of wood and located where the stairs of the Anchieta Palace are now. Besides this space, Vitória also had other points, similar to the Cais and sharing the same problems. Because of the location, the ships were offshore and could not dock due to the dangers of submerged rocks. Because of this, the cargo transport was done by rafts or catrals – vessels with little draft, powered by sail or rowing, similar to a motorized canoe.

With the increase in demand and also in the volume of coffee exports and imports, for example, it was necessary to think about a larger structure that would contemplate the plans. In 1906 the Port of Vitória is created, until then called Companhia Porto de Vitória (CPV). At the time, because of the influence and large volume of coffee production in the state, this was the main product exported.

The first studies, however, for the construction of the Port of Vitória date back to 1881. However, due to the low commerce and the lack of structure, especially roads connecting to the interior of the state, the project took longer to get off the paper. 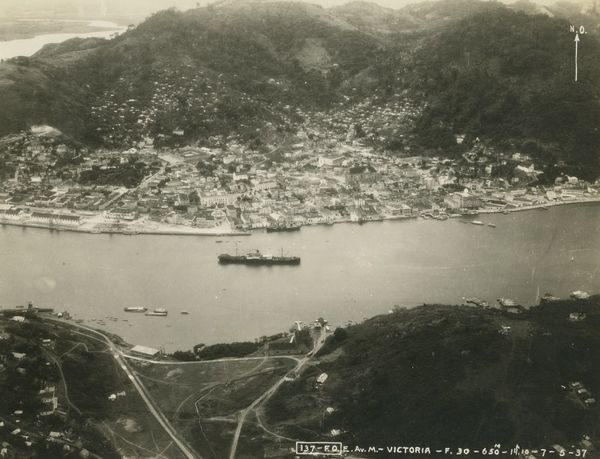 View of the Port of Vitória in 1937. Créditos: Arquivo Nacional e Rede Gazeta

In all, it has 14 docking berths and its operations handle more than 30 different types of cargo, ranging from import to export. As examples we have the transport of containers, cars, grains, steel products, fertilizers, malt, etc.

The first phase of construction of the port would only end in 1927, with other modifications and increased structure that lasted for a few more. The second phase of the work began the following year, with the inclusion of the construction of warehouses I and II, which were completed in 1929. The third warehouse facility would not be completed until 1932.

However, the actual inauguration would only take place in 1940, 59 years after the first studies for its construction. That year, not only would the Vitória wharf begin, but also the ore shipping station in Vila Velha, which would give rise to the entire port complex.

In the years following the opening of the Port, many changes took place. There has been a lot of downtime in the expansion of the port complex, but also a lot of growth in the structure. All these changes were responsible for gradually transforming the Port of Vitória into one of the largest port complexes in Brazil, favoring the economy not only of the state but also of the whole of Brazil.

With this, companies Ship Chandlers also benefit from the growth. This benefit is not restricted only to companies that have some connection with the maritime sector, but can cover all national businesses, since its facilities have enabled a greater distribution of imported products and also facilitated the export of items produced in the territory of Capixaba.

And to stay on top of everything that happens in the maritime market and also get exclusive content, written by our team, just keep an eye on our blog.

Itajaí Port Complex moves 8.3 million tons in the first semester
Abandoned Titan: World's Biggest Cruise Ship Goes to the Junkyard
Redex: what is it and what is its impact
Why have environmental management in the oil industry?